Ukraine crisis: Casualties of war as missiles rain down 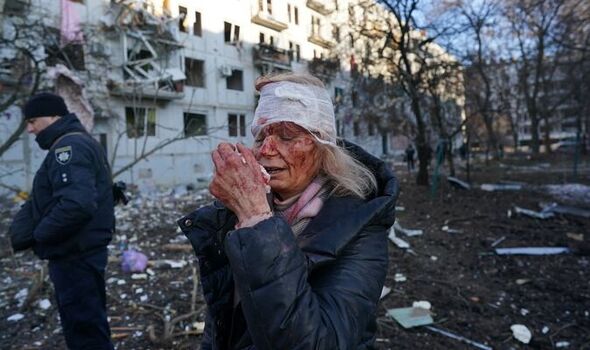 At least 100,000 people fled their homes and several thousand crossed into neighbouring countries when they became engulfed in Europe’s biggest conflict since the Second World War. And in a symbolic message to the entire world, Russian troops seized control of the Chernobyl power plant – the scene of the world’s worst nuclear disaster in 1986.

Last night, Moscow’s forces were moving in on the capital Kiev, where its people continued to queue for cash, fuel and food.

In the Black Sea port of Odessa, an air strike killed 18 people and dramatic photos captured the horror as families were bombed out of their homes.

Residents fled as a block of flats in Ukraine’s second largest city Kharkiv was blasted by an air attack, showering them with glass.A young boy in one bombed tenement was among the first killed.

The eastern town of Chuhuiv, south east of Kharkiv, was also targeted.

Air assaults destroyed key military targets across the country as Russian tanks and troops rolled across the border from annexed Crimea northwards towards Kherson.

At the same time, columns of Russian fighters advanced down from Belarus, north of Ukraine, towards Kiev and from the north east towards Kharkiv. Among the targets were power stations, including a hydroelectric plant in Kakhovka, where troops raised a Russian flag. Moscow also claimed it had destroyed more than 70 military targets, including 11 airfields.

The Kremlin called the invasion a success but the UK’s Ministry of Defence said both sides suffered “heavy losses”.

He said: “The Kremlin’s aim is to re-establish its sphere of influence, rip up the global rules that have kept us all safe for decades and subvert the values we hold dear.

“This is the new normal for our security. Peace cannot be taken for granted.”

As Ukraine’s forces were ordered to inflict “maximum losses” on the enemy, President Volodymyr Zelensky said of Putin’s invasion: “This is a declaration of war against the whole of Europe.”

In the first few hours of the assault, more than 100 missiles were launched from land and sea. Border units, patrols and checkpoints were hit with artillery, heavy equipment and small arms fire, Ukraine said.

The airfield can host huge cargo planes – but last night Ukrainian forces said they had repelled the attack.

At Chernobyl, Ukraine’s military attempted to attack Russian troops from three sides but could not regain control of the area. Moscow wants to control the plant as a signal to Nato allies not to interfere, a Russian military source said. Three of its four reactors, which were closed in 2000 have yet to be fully decommissioned.

Mykhailo Podolyak, an adviser to the Ukrainian president, warned: “It is impossible bp to say the Chernobyl nuclear power plant is safe after a totally pointless attack by the Russians. This is one of the most serious threats in Europe today.”

Western diplomatic sources say that Putin is seeking to control huge swathes of Ukrainian territory. They fear he may use “overwhelming firepower” to try to take control of Kiev, using the same tactics Russia deployed in Chechnya, which would cause huge civilian casualties.

US officials said Russia was “making a move on Kiev [with] every intention of basically decapitating the Government and installing their own method of governance”. Washington believes Putin’s operation will happen in multiple phases.

Its experts said more than 100 Russian missiles, of various sizes and ranges, were fired in the initial advance.

Ukraine’s armed forces said they shot down multiple Russian aircraft. Moscow confirmed the loss of a Su-25 attack jet – but blamed it on “pilot error”.

Meanwhile, Britain’s Ministry of Defence warned: “Heavy casualties have been suffered on both sides.”

Officials added: “Strikes have been delivered through a combination of Russian ground, air and sea-launched missiles and by artillery bombardment.”

Meanwhile, Russian troops were in a firefight with Ukrainian forces as they closed in on Kharkiv last night.

Video from the city showed a barrage of missile strikes, small arms fire and devastated buildings. Burned-out Ukrainian and

Russian military vehicles could be seen on roads leading into the town. Ukrainian soldiers posted a photograph of what appeared to be two Russian prisoners of war and their identity documents.

He said: “No one will be able to convince or force us, Ukrainians, to give up our freedom, our independence, our sovereignty.

“But it seems that the Russian leadership is trying to do this by destroying the potential of their country. Everything that Russia has done since 2000 can now be burned live in front of the world.”

He added: “What can Ukrainians do? Help the national defence. Join the ranks of the armed forces of Ukraine and territorial defence units.

“Any citizen with combat experience will now be useful.

“It is up to you and all of us whether the enemy will be able to advance further into the territory of our independent state.

“Please help the volunteer community and the medical system, for example, by donating blood.

And Mr Zelensky also warned other countries: “If you, dear European leaders, dear world leaders, leaders of the free world, do not help us today, then tomorrow the war will knock on your door.”

Nato’s Mr Stoltenberg said: “Peace on our continent has been shattered.

“Make no mistake: we will defend every ally against any attack on every inch of Nato territory.”

Asked about the possibility of stopping Putin, the UK’s Ukrainian ambassador, Vadym Prestaiko, said: “We hope that [Putin] will be stopped. The losses are unbearable already for us.”

He added: “We can say that we should have started much earlier, maybe decades ago, to invest in our army and prepare ourselves. This is why we tried to get into Nato all these years.

“We always knew this would come.”