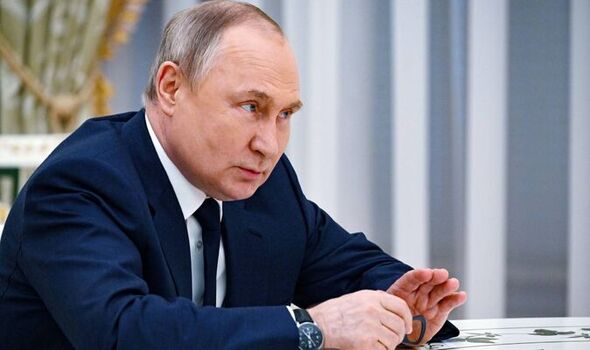 Antonio Guterres undertook frank negotiations with the president hours after Kremlin Foreign Minister Sergey Lavrov threatened that there was a “considerable” risk of the Ukraine conflict globally escalating to nuclear weapons.

Lavrov accused Nato forces of “pouring oil on the fire” by providing weapons, as he said it was engaging in a proxy war with Russia by arming Kyiv.

US Defence Secretary Lloyd Austin said: “Nobody wants a nuclear war, no one can win that.”

And Britain’s Armed Forces minister James Heappey stressed that it was not Nato as an organisation donating arms to Ukraine.

He added: “Sergey Lavrov might also reflect that the reason there is a war in Ukraine right now is because Russia rolled over the borders of a sovereign country and started to invade their territory.”

Earlier, Lavrov was asked about the importance of avoiding wider bloodshed and whether the conflict was comparable to the Cuban missile crisis in 1962 when the US and the Soviet Union stood on the brink of nuclear war.

He replied: “The risks now are considerable.The danger is serious, real. We must not underestimate it.” Mr Guterres urged Lavrov to agree to a ceasefire in Ukraine.

Stressing he was in Moscow as a messenger of peace, the UN chief said he understood Russia had “many grievances” but added that Russian troops were in Ukraine and not vice versa.

He said: “The sooner peace is established, the better – for the sake of Ukraine, Russia, and for the world,” he told a press conference in Moscow.

Lavrov complained thatWestern involvement in its neighbour had been used as a foothold to limit, control and aggravate Russia.

He also blamed the conflict on the West’s “infringement” into Russia’s “geopolitical space”, which he said had side-lined Moscow’s influence in Ukraine.

Mr Guterres’ negotiations with Putin then took place in private a few hours later. Their contents were not made public. But it is understood that talks centred not only on de-escalation and a possible ceasefire but also about the fate of besieged Mariupol.

Despite declaring a victory there, Russian forces have failed to take the sprawling steelworks where civilians are sheltering and local forces are holding out.

The Ukraine military said yesterday that Russia was continuing to blockade the plant.

Mr Guterres said the organisation was “ready to fully mobilise its human and logistical resources”.

He added that “thousands of civilians are in dire need of lifesaving humanitarian assistance” in the port city where “large parts have been destroyed”.

Mr Guterres also proposed working with the Red Cross to allow people holed up inside the Azovstal plant to leave.

The UN chief is now expected to travel to Kyiv tomorrow and meet President Volodymyr Zelensky.

UN sources had warned that expectations ahead of yesterday’s meeting with Putin were low after several failed diplomatic efforts so far.

In his nightly video address to the nation, President Zelensky said it was impossible to predict when the war will end, But he claimed his country’s victory was inevitable.

In other developments, the US also began Ukraine-related defence talks with dozens of countries yesterday, with US Defence Secretary Lloyd Austin playing host in Germany.

Britain is sending a small number of Stormer armoured vehicles fitted with launchers for anti-aircraft missiles in the latest shipment to repel Moscow’s murderous advance.

Germany is also expected to approve the delivery of Gepard self-propelled anti-aircraft systems to Ukraine as part of a pledge of a significant increase of support from Berlin.

Before meeting the UN head, Putin gave a long rambling televised speech where he again falsely claimed the atrocities in Bucha – where civilians were tortured and executed – were staged in a provocation.