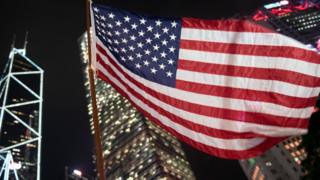 The US has halted its extradition treaty with Hong Kong, the latest move to pressure Beijing after it imposed a controversial national security on the former British territory.

It is one of three bilateral treaties suspended on Wednesday.

The US State Department said the security law had “crushed the freedoms of the people of Hong Kong”.

“The Chinese Communist Party chose to crush the freedoms and autonomy of the people of Hong Kong,” Secretary of State Mike Pompeo tweeted.

China has not yet commented on the latest suspensions, which were widely expected as the US imposed a raft of punitive measures in the wake of the new law.

What are the latest measures?

They cover “the surrender of fugitive offenders, the transfer of sentenced persons and reciprocal tax exemptions on income derived from the international operation of ships”, State Department spokeswoman Morgan Ortagus in a statement.

The suspension of the reciprocal tax exemptions is likely to take a significant hit on Hong Kong companies – many of these companies had relied on such exemptions for relief.

Other nations, such as the UK, Germany and Australia have also suspended extradition treaties in recent weeks.

In words bound to anger China, he called 71-year-old Mr Lai – a prominent pro-democracy voice and a supporter of protests that erupted last year in Hong Kong – “a brave man”.

What does the security law mean for Hong Kong?

The US sees the security law as a threat to the freedoms Hong Kong was guaranteed under the handover agreement.

Its special status was agreed between China and Hong Kong’s former colonial power, the UK, before sovereignty was returned to Beijing in 1997.

The law – which outlaws criticism of China’s government – is the most sweeping change to the political landscape of Hong Kong since then.

Critics say it effectively curtails protest and freedom of speech. But China has said the new law will return stability to the territory after a year of unrest.