Home » World News » US tornado terror: Up to 100 dead and many trapped as state of emergency declared

US tornado terror: Up to 100 dead and many trapped as state of emergency declared 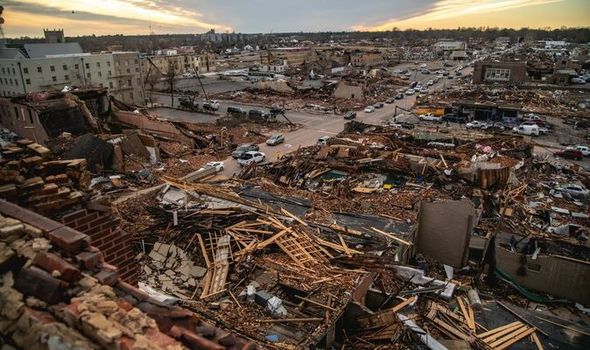 Frantic search-and-rescue operations continued in Mayfield, Kentucky, last night, where dozens are believed to have been killed in a collapsed candle factory. Scores more are feared trapped by debris. A courthouse and dozens of family homes in the town – population 10,000 – were also destroyed.

A harrowing Facebook video, credited to Kyanna Lou from inside the wreckage, appeared to show survivors in darkness sobbing and pleading for help. A woman is heard saying: “I don’t know who’s watching. I’m at work and we’re trapped. Please y’all, give us some help. The wall is stuck on me. Nobody can get to us.We can’t move.”

Kentucky Governor Andy Beshear declared a state of emergency, saying: “It’s been one of the toughest nights in Kentucky’s history.” He estimated the death toll would “exceed 50” and “could reach 100” after “some of the worst tornado damage” known.

Get the latest three-day weather forecast where you live. Find out by adding your postcode or visit InYourArea

A bombardment of at least 30 twisters also ripped into Illinois, where workers were rescued after a giant Amazon warehouse collapsed. Rescue teams are also searching for survivors among the rubble after at least two workers died. In Arkansas two people were killed when a nursing home was destroyed in the small town of Monette. And extensive damage and injuries were also reported in Missouri, Mississippi and Tennessee.

One analyst reported that the tornadoes were so fast and fierce they were throwing debris 30,000ft in the air.