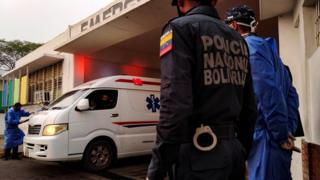 More than 40 people were reportedly killed after rioting broke out at a prison in Venezuela.

Inmates at Los Llanos jail, near western Guanare city, were angry at a lack of food and water, according to the Venezuelan Prison Observatory.

The organisation called for an investigation, casting doubt on the official version that the prisoners had attempted a jail-break.

Prison staff including the governor were wounded in the incident.

The Prisons Minister Iris Varela told a Venezuelan newspaper that there had been an incident at the jail but did not give a death toll. The incident was described as an escape attempt in that report.

Riots in the unsanitary and overcrowded prisons of Latin America have been increasing as governments introduce containment measures to help slow the coronavirus outbreak.

Quarantine measures may mean that inmates cannot receive food brought by relatives, on which they may depend.

The observatory, a prison watchdog, said 46 inmates had died and the local hospital’s emergency department was overwhelmed with the number of wounded.

Opposition National Assembly member Maria Beatriz Martinez, tweeting from outside the prison (in Spanish), described the incident as a “massacre” and said relatives understood their loved ones would be buried in mass graves. They were demanding the bodies be returned to them, they said.

As well as the coronavirus pandemic, Venezuela is engulfed in a political crisis with two rival politicians claiming to be the country’s legitimate leader.

Under President Nicolás Maduro the economy has collapsed and shortages of basic commodities have become widespread. Millions of people have fled to neighbouring countries.