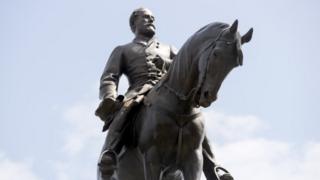 Virginia’s Governor Ralph Northam has announced that a statue of Confederate General Robert E Lee will be removed from the state capital.

The controversial statue will be put into storage ” as soon as possible”, the governor said.

The monument has been vandalised during recent protests over the killing of African American George Floyd.

Memorials to the Confederacy, which fought to keep black people as slaves, have long stirred controversy.

At a news conference, a round of applause erupted when Governor Northam said the 12-ton statue would be removed.

“In Virginia, we no longer preach a false version of history,” the governor said.

“In 2020, we can no longer honour a system that was based on enslaving people. That statue has been there a long time. But it was wrong then, and it’s wrong now. So we’re taking it down.”

Referencing Gen Lee’s own words, Governor Northam said it was not “wise not to keep open the sores of war”.

The Robert E Lee statue is the largest of five Confederate statues along Richmond’s Monument Avenue. They have been rallying points during protests in Virginia in recent days, and have been tagged with graffiti, including messages that say “end police brutality” and “stop white supremacy”. 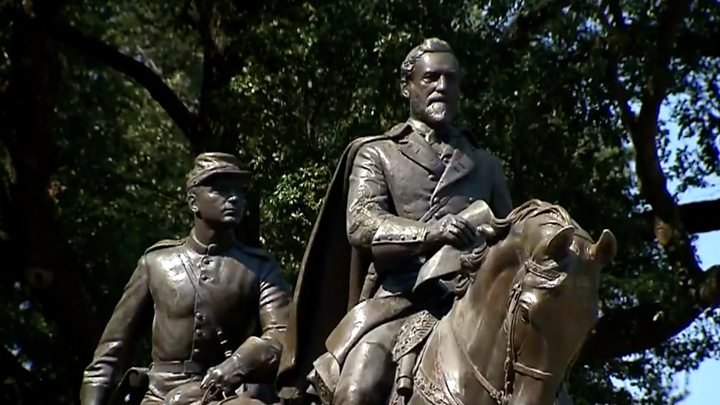 “They are extremely heavy and would crush anyone standing too close. Please be aware of the danger. Stand down!” the Richmond Police Department tweeted on Monday.

Hundreds of statues of Lee, General Thomas “Stonewall” Jackson and other famous figures of the Confederacy – the southern states that revolted against the federal government – exist in the US.

Some see the memorials, as well as Confederate flags, as markers of US history and southern culture.

But to others they serve as an offensive reminder of the country’s history of slavery and racial oppression.

Rev Robert W Lee IV, great-great-grandson of the Confederate general, gave his blessing for the monument to be removed at Thursday’s news conference.

He said the world was watching Virginia and the US as protests over the death of Mr Floyd convulsed the country, asking: “If today is not the right time, when will it be the right time [to remove the statue]?”

The debate around Confederate symbols received renewed attention after the protests in Charlottesville in 2017, triggered by the city council’s decision to remove a statue of Lee.

The resulting rally caused the deaths of a counter-protester and two state troopers died in a helicopter crash as they monitored the event.

An independent inquiry into a racist photo on Democrat Ralph Northam’s 1984 college yearbook page ended in 2019 with no conclusive findings.

The report could not determine the identities of two individuals, one in blackface, the other in Ku Klux Klan robes, in the image.