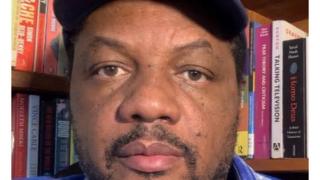 Hopewell Chin’ono live-streamed his arrest on Monday on social media before being told to put his phone down.

It is not yet clear why security officials broke into Hopewell Chin’ono’s home and arrested him.

The US embassy called it deeply concerning, and the journalist’s lawyer said it was an abduction.

“We’re not sure where he has been taken. His helper says they did not produce any warrant when they came to his house,” human rights lawyer Beatrice Mtetwa said in a video statement.

Motioning to a smashed patio door at Mr Chin’ono’s home, Ms Mtetwa said eight or so security agents were involved in the raid.

This video streamed on Facebook appears to show the moment the investigative journalist was confronted inside his home:

What did Mr Chin’ono report about?

Mr Chin’ono’s reporting on alleged Covid-19 procurement fraud within the health ministry led to the arrest and sacking of Health Minister Obadiah Moyo.

A government official later responded by tweeting that journalists were not above the law.

BBC Africa correspondent Andrew Harding says the incident comes at a time of rising tensions in Zimbabwe, with hyperinflation strangling the economy, and talk of a new round of mass protests against Zanu-PF, the party that has run the country since independence.

But critics say it has reverted to its old habits of repression and corruption.