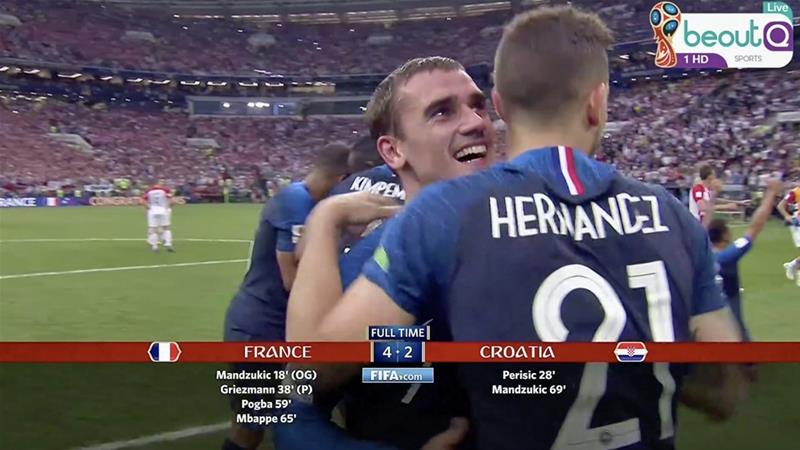 The World Trade Organization (WTO) issued its ruling on the Saudi Arabia-based piracy operation known as beoutQ on Tuesday. Below is the executive summary of the final WTO verdict:

The World Trade Organization (“WTO”) – one of the world’s most-highly regarded international adjudicative bodies that oversees 164 member countries – has completed an impartial, independent and detailed 1.5 year evaluation of Saudi Arabia’s conduct in relation to beoutQ’s piracy. As part of the proceedings, The Premier League, FIFA, UEFA, LaLiga, Bundesliga and many other sports bodies made declarations directly against Saudi Arabia. Should The Premier League approve the Newcastle takeover by KSA, it would be acting inconsistently with its own decisions and factual evidence as part of the WTO proceedings and also its submissions to the US Government, the European Commission and others over the past 3 years – hence the relevance to that takeover.

In its final judgment – published on 16 June 2020 – the WTO has conclusively ruled that the Government of Saudi Arabia has actively promoted and supported the beoutQ pirate operation since the beginning and has wholly breached, and is breaching, its obligations under international law to protect intellectual property rights. The WTO ruling calls upon Saudi Arabia to immediately bring itself into compliance with its international law obligations.

Ordinarily, violations of intellectual property rights are remedied through domestic courts in the country where the unlawful conduct occurs. For example, if these offences had been committed in the UK, the High Court would have immediately ruled on the matter, there being indisputable offences under the Serious Crimes Act 2007, the Copyright, Design and Patent Act 1988, the Criminal Law Act 1977, and the Accessories and Abetters Act 1861.

In the case of beoutQ, the primary, most appropriate and most immediate legal recourse against the piracy is via the courts of Saudi Arabia, which is where key actors involved in the piracy are located and the criminal and civil offences have been committed for 3 years. However, access to these courts to bring proceedings has – in an unprecedented act – been deliberately denied by Saudi Arabia. Saudi Arabia has blocked nine (9) attempts by The Premier League, FIFA, UEFA and a host of other sports bodies who have suffered immense damage from bringing legal action in Saudi Arabia. As such, international law and Tribunals have to be relied upon – hence the case being brought before the WTO. International law cases take a huge amount of time – this WTO decision has taken over 1.5 years to conclude – which is all part of Saudi Arabia’s deliberate strategy of avoiding any accountability.

Cases before the WTO, by definition, have to be brought by countries – hence, the case was brought against Saudi Arabia by Qatar. Many other countries participated in the proceedings as third parties, inc. the European Union (representing all EU states inc. the UK), Canada, Japan, Singapore, Brazil and Australia – all these countries provided submissions that supported various aspects of Qatar’s arguments, including questioning Saudi Arabia’s ultimately-failed national security defence (see below). In addition, many sports bodies submitted evidence directly against Saudi Arabia, including The Premier League, FIFA, UEFA, LaLiga, Bundesliga and many others. To be clear, this case is nothing to do with politics – it is IP theft on a mass scale, and beoutQ’s victims include everyone from Wimbledon, F1, NFL, NBA, FIFA, UEFA, broadcasters beIN, Sky, BBC. Qatar was the appropriate entity to bring a WTO case and was supported by many other organisations and countries.

Separate to the WTO case, international media group beIN Media Group has also brought an investment arbitration against Saudi Arabia – which will make even wider findings than the WTO case. The arbitration seeks compensation of US$ 1 billion (calculated as at 1 October 2018 and the damage has accumulated ever since) for a range of Saudi actions targeting beIN, including beoutQ. Like with the WTO case, beIN is forced to bring (costly and slow) proceedings under international law in order to have its claims against Saudi Arabia heard, given the Saudi courts are deliberately blocked by Saudi Arabia. The beIN arbitration claim was filed on 1 October 2018 and a ruling is some time away, but another major successful ruling against Saudi Arabia is expected in the investment arbitration, much like the WTO ruling.

The WTO ruling has two significant aspects: (1) the WTO’s factual findings, resulting in (2) the WTO’s decision on breach of WTO rules and international law.

The WTO has confirmed that beoutQ piracy – and related failures to protect intellectual property – are attributable to the Saudi Government. The WTO’s factual findings include:

1st, the Saudi State actively promoted and supported beoutQ from the beginning and even sponsored multiple public gatherings with beoutQ screenings, including during the FIFA World Cup 2018 when the Saudi Government announced 294 public display screenings allocated across the 13 regions of Saudi Arabia broadcasting beoutQ; and – in addition – the Saudi State did not take any action whatsoever against beoutQ over the course of 3 years. (WTO Panel Report, paras 7.157–7.164 and 7.219)

2nd, Saudi government officials and entities, including the “right hand man” to Saudi Crown Prince Mohammad bin Salman, Saud Al-Qahtani, publicly promoted beoutQ from the beginning including with “governmental tweets”. (WTO Panel Report, paras 7.113–7.114). (Incidentally, after his role in successfully promoting the launch of beoutQ, Al-Qahtani then went on to being identified as the architect of the murder of Jamal Khashoggi, whose fiancee has publicly opposed the pending Newcastle takeover by the KSA government)

3rd, the WTO found that beoutQ was hosted on frequencies transmitted by satellite provider Arabsat (an entity with a Saudi CEO, majority-owned by the Saudi Government, headquartered in Riyadh and which has ignored hundreds of take-down notices from The Premier League, FIFA, UEFA, beIN, other broadcasters, and many others including Qatar), supported also by Saudi company Saudi Selevision Company LLC. The WTO also endorsed a 2019 French court decision which definitively ruled that Arabsat carried beoutQ. (WTO Panel Report, paras 7.107, 7.146–7.149, 7.150–7.154)

4th, despite being provided with extensive evidence by The Premier League, the UK Government, FIFA, UEFA, beIN and others, Saudi authorities deliberately did not take any criminal action against beoutQ. Further, the Saudi Government obstructed the initiation of civil copyright infringement cases, including by pressuring nine (9) Saudi law firms to refuse taking on such civil action by The Premier League and others. (WTO Panel Report, paras 7.65, 7.66, 7.71, 7.73, 7.219)

5th, the WTO found that the beoutQ piracy continued for years even in the face of complaints by the US Government, the European Union, and the United Kingdom, as well as by some of the most high-profile sports leagues and media companies around the globe. (WTO Panel Report, paras 7.127–7.130)

With regards to the Article 61 breach, in a landmark decision, the WTO rejected Saudi Arabia’s defence of national security. This is the first time in the 73 year history of the WTO (and its predecessor the GATT) that the WTO has rejected any country’s attempt to invoke the national security exception as a defence. Theft of TV rights has nothing to do with a country’s national security, it is commercial theft, which in this case has continued for 3 years and is continuing. (WTO Panel Report, para 8.1(c)(ii))

The WTO did permit Saudi Arabia to rely on the national security defence to justify its violations of Article 42 and 41.1. This is purely because the WTO’s national security exception grants considerable discretion for this defence (hence it has never been rejected for 73 years); Saudi Arabia only needed to demonstrate “a minimum requirement of plausibility” when showing a connection between its “security interests” and its violations of WTO law (i.e. beIN is a Qatari company – that is it). All the factual findings still stand despite this. (WTO Panel Report, para 7.293).

Critically, once the WTO established that Saudi Arabia was wholly in breach of international law, the WTO chose not to waste time ruling on any further connection between Saudi Arabia and beoutQ, despite that being clear, as it didn’t need to. As soon as it was established that the Saudi State actively promoted and supported beoutQ from the beginning, the WTO needed to go no further. There is a range of other – in many cases still-to-be-disclosed – evidence establishing how beoutQ was fully financed, directed and controlled by the Government of Saudi Arabia, which The Premier League has seen. Further, quite simply, the name “beoutQ” reflects exactly the Saudi Government’s policy.

All the WTO’s findings were made despite Saudi Arabia’s extensive representations to the WTO over 1.5 years. Saudi Arabia must now heed the WTO demand to stop its abuse of valuable IP rights. Unfortunately, Saudi Arabia has consistently demonstrated that if it chooses to follow the WTO’s demands, any measures will likely be a mockery, at best leading to the conviction of only no-name low level scapegoats, just as was the case with the Khashoggi murder trial. This is at a time when Saudi Arabia seeks to play an increasingly larger role in the world of sports and entertainment through its own investments in teams and other infrastructure (including Newcastle United), all of which is predicated on the protection of intellectual property.

3. Other Legal / Governmental Rulings re. Saudi Arabia, IP and beoutQ

The WTO ruling reaffirms a number of critically important facts that already have been determined by other courts of law, governments, technical experts and rights-holder investigations – inc. findings by The Premier League itself.

In May 2020, the Football Association (the FA) wrote to H.E. Dr. Majid Al-Qasabi (the Saudi Minister for Commerce, the Acting Minister for Media, and director of the Saudi Arabia Public Investment Fund (PIF) seeking to buy Newcastle United) demanding that another non-beoutQ Saudi-run broadcaster – KSA Sports – stop stealing the FA’s rights which it did throughout May 2020. In July 2019, UK Secretary of State for International Trade, Liam Fox, also wrote to Al-Qasabi demanding an end to beoutQ.

In April 2020, the United States Government published two scathing reports4, one of which placed Saudi Arabia on its top “Priority Watch List” for the 2nd consecutive year, due in part to rampant piracy and beoutQ, notwithstanding the operation being currently down on satellite. The US Government also slammed the “millions of beoutQ-branded IPTV boxes in homes and business throughout the region” some “repurposed with other illicit IPTV streaming applications”. beoutQ boxes provide access to every major channel in the world, including Sky, Disney, BBC, ESPN, Fox Sports, Canal and beIN SPORTS.

In January 2020, the European Commission likewise published a major report in which it singled out Saudi Arabia for “causing considerable harm to EU businesses” following the unprecedented theft of European sport programmes by Saudi-based beoutQ and Arabsat.

In September 2019, FIFA, UEFA, The Premier League, LaLiga, Bundesliga, Serie A, LFP and AFC published their own 158 page investigative report, which establishes “without question” that beoutQ’s satellite transmissions have been distributed by Saudi-headquartered Arabsat. That report also describes in detail the sophisticated IPTV streaming function of beoutQ’s operation, including how one of the most damaging IPTV pirate apps – “EVDTV” – is based in Riyadh and remains operational.

In June 2019, a French court (Tribunal de Grande Instance de Paris) held that Arabsat distributed beoutQ on its satellite network despite Arabsat’s 2-year denial and beoutQ openly stating the Arabsat frequencies on its Facebook channels. The French court also found Arabsat switched satellite frequencies during testing in order to deceive the court so that the court could not make further rulings against it.

Finally, when The Premier League and other UK sport returns (including Newcastle United playing their first game against Sheffield United on Sunday 21st June), the only way to watch matches in Saudi Arabia – population 35m – will be illegally, either on beIN SPORTS which is available only via the grey market (in another violation of international law by Saudi Arabia), or via beoutQ and other pirate IPTV boxes.